Our MgO:PPLN crystals have been used to generate as much as 11W at 780nm in a frequency-doubled 1560nm CW SHG system [1]. Furthermore, a peak power of 43W at 780nm has been achieved in a quasi-CW using two cascading MgO:PPLN crystals, with an efficiency of 66% [2]. Details about the experimental setup, SHG crystals and focussing conditions leading to these results, are discussed below.

These MgO:PPLN based laser systems have been used in several applications including, a demonstration of a quantum superposition over 54 centimetres [3], a precision gravimeter [4], a dual-species atom interferometer for BECs [5], and a new type of sensor which simultaneously measures gravity and magnetic field gradients to a high precision [6].

ANU's Quantum Sensors and Atom laser Group demonstrated an 11.4W narrow linewidth laser source [1]. Using a 30W 1560nm fiber laser in a single-pass frequency doubling scheme, Sané et al. achieved a 6kHz linewidth 780nm laser with 36% efficiency. This corresponds to an efficiency of 0.3%/Wcm (in a low gain system, you can typically achieve 0.6%/W/cm), and the maximum input intensity to the crystal is 500kW/cm2. The system was run for over 2200hrs of operation with no reduction in power. The SHG output power is shown in Fig. 1, with an inset showing the spatial mode of the 780nm light. The 780nm source is measured to have a linewidth of 6 kHz integrated over 100ms. 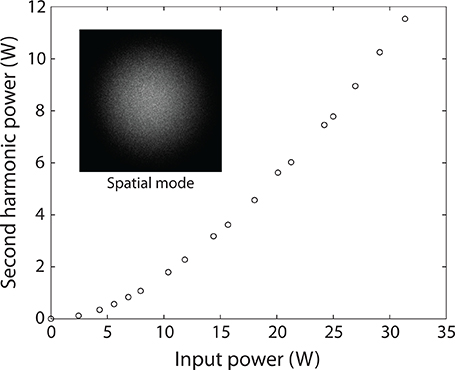 The optical setup of the laser system is shown in Fig. 2, with the 30W 1560nm laser, MgO:PPLN crystal, and Rb cell for locking the seed laser. A standard MSHG1550-1.0-40 was used as the SHG crystal, heated in a PV40 oven with an OC1 temperature controller. The crystal parameters and focussing conditions used were:

The Kasevich group at Stanford University have demonstrated 43W of quasi-CW 780nm light [2]. Chiow et al. describe a cascaded single pass SHG system using two MgO:PPLN crystals. The system is pumped with two combined 1560nm 30W fiber amplifiers, and by adjusting the relative phase between these two sources, the temporal profile of the 780nm output can be controlled. With a combined pump power of 65W, a peak power of 43W is achieved at 780nm, corresponding to an efficiency of 66%. With a single crystal, an of 52% efficiency is achieved. The SHG output peak power from an single crystal and from two cascaded crystals is shown in Fig. 3. The data from Sané et al. are also shown in green, showing almost identical results. 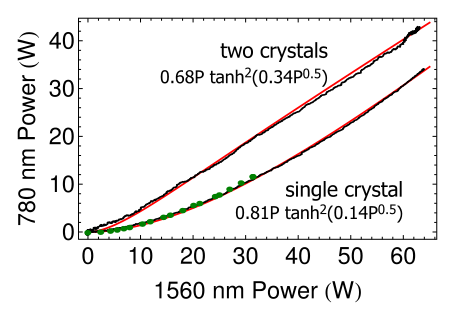 The optical setup of the laser system is shown in Fig. 4 with the two fibre amplifiers (FA) and two cascaded MgO:PPLN crystals. Standard MSHG1550-1.0-40 crystals in PV40 ovens were used, from which a period of 19.2µm was selected, at an operating temperature of 150C. The pump was focussed into PPLN1 with a 50mm focal length lens, a curved mirror (CM) with ROC 10cm collimated the output beams which were then focussed into PPLN2 with another CM. Analysis of the 780nm spatial beam profile from the cascaded system measured a beam quality of M2= 1.15+/-0.2.