Micropositioning, of the input beam must be started from low level of laser beam energy and be carried out very carefully. Sometimes the damage occurs in the place of a hidden defect (alien particle, excessive bending, or some other defect of structure).

In the case of continuous radiation of CO2, laser and PIR-fiber, in spite of nearly the same surface absorption for both ends, melting -starts from the output end as a rule. It is caused by a superposition of direct and reflected speckle patterns of light waves near the output end. Random addition of these patterns leads to some local maximums, and melting begins at the points with the highest local intensity. For IR fibers the threshold intensity averaged over the whole cross-section is about 7-10 kW/cm2. This intensity can be increased by cooling of the end surface by a flow of dry gas. 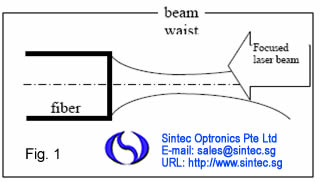 Investigations on the transmission of pulsed radiation of TEA CO2 laser through polycrystalline fibers have shown that the damage usually occurs in the initial part of a fiber at distances from several millimeters up to several centimeters from the input end. Fiber damage threshold induced by a pulse is significantly lower than in initial crystals. This effect can be associated with the focusing of input radiation by the cylindrical side the surface of the fiber. Estimated values of the threshold in fibers with regard to the additional focusing correspond to the bulk threshold at initial crystals.

Do not hesitate to connect with us for technical consultation!